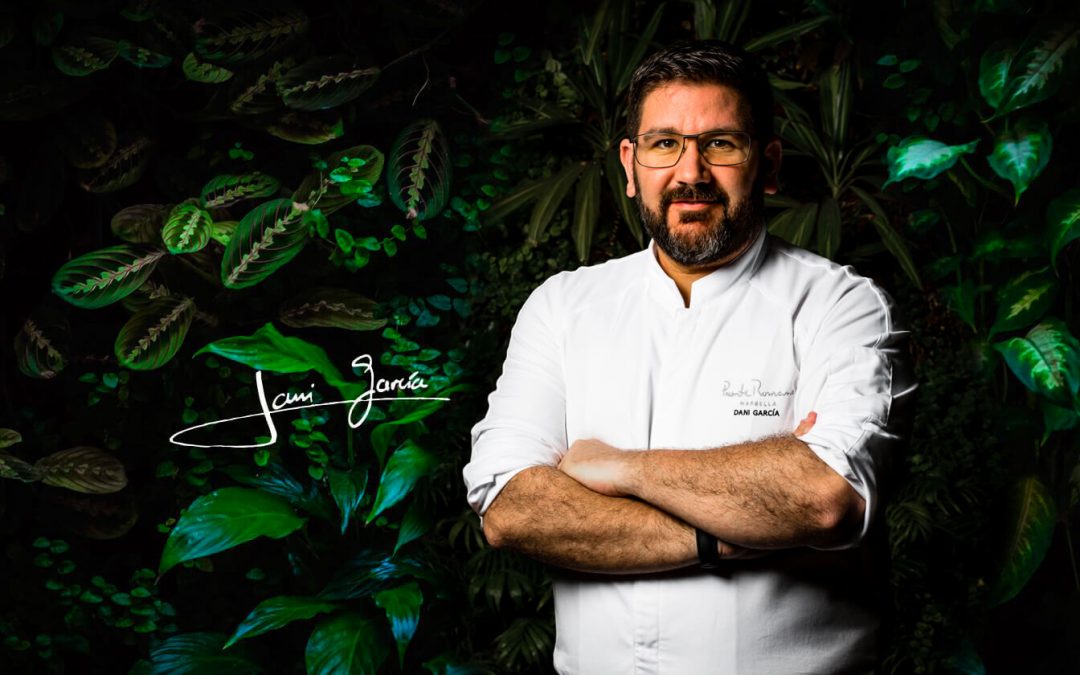 Celebrity chef Dani García, also known as the “craftsman of flavor” has been awarded his third Michelin star for his self-titled restaurant. The Marbella-based restaurant was the only one to be awarded the coveted third star in a ceremony in Lisbon in November 2018.

The Michelin inspectors described Dani García’s culinary expertise as a “unique way of reformulating Andalusian cuisine in a contemporary key, making each preparation tell a different story based on a product that links up with local tradition”. Dani is the first chef in the Málaga region to have a third Michelin star.

Who is Dani García?

Hailing from the Málaga province, Dani García attended “La Cónsula” in the city, and later went on to learn from chef Martín Berasategui. García received his first star at Tragabuches at the incredible age of 25 and has long been known for his incredible cuisine which is a combination of the traditional Andalusian kitchen and other international flavours. Whilst working in Calima, García was awarded his second star, making him the first chef with two stars in Andalucía.

He now has more than 30 awards, in addition to his Michelin stars, making him one of the most celebrated chefs in Spain.

The restaurants of Dani García

The self-titled restaurant which earned Dani García his third star can be found in the heart of 5-star Hotel Puente Romano in Marbella. The menu is carefully put together by Dani and is said to be representative of the incredible chef himself. The restaurant offers diners the option of creating their own meal, choosing from a clever menu with the most representative dishes from Dani´s career.

The restaurant is fitted with its own wine cellar, packed with 600 hand selected wines. In fact, the cellar of Dani García was awarded the Best Award of Excellence in 2017 by the Wine Spectator.

BiBo Marbella is a separate restaurant also situated in Hotel Puente Romano. BiBo is a restaurant filled with soul and harmony, packed with Andalusian features; bright colours and vintage details. The menu takes you on a trip around the world with flavors from countries including France, Norway and Peru. Diners receive an exclusive dessert, cocktail and wine menu, to make the experience complete. It´s an experience you won´t forget.

Even in Madrid you can find a piece of Dani García’s excellence. BiBo Madrid is designed by Lázaro Rosa-Víolán, the restaurant is impressively decorated with 7,000 light bulbs which is used to portray the lights of the Feria de Málaga. BiBo Madrid offers an impressive menu of 80 dishes with the same vision as the Andalusian partner. Everything from the food and drinks to the fascinating décor, makes BiBo Madrid a unique dining experience.

Back to Marbella and another restaurant extravaganza from Dani García, the “beach less chiringuito”, Lobito de Mar. A restaurant truly based on García’s fondest memories of visiting the Saturday market buying fresh seafood and cooking at home. The impressive restaurant in Marbella is strongly influenced by Andalucía and it's sun drenched coast. At Lobito de Mar you can find a separate bar and restaurant menu, as well as remarkable cocktail and wine menus.

Andalucía offers a wealth of gastronomic delights and there are dozens of restaurants with Michelin stars, and without, to enjoy. Siesta Homes has two unique boutique developments, situated 30 minutes from Marbella, where you can experience the best of the coast's dining experiences.

Nestled amongst beautiful country scenery in the foothills of the Sierra de las Nieves mountains, The Oakhill is an exclusive and secluded private estate of just 40 luxury apartments in La Mairena, just a short drive away from the best beaches in Marbella.

These sprawling multi-level properties enjoy spectacular uninterrupted mountain and sea views from all rooms and provide the unique opportunity to customize each property to the discerning buyers´ requirements.